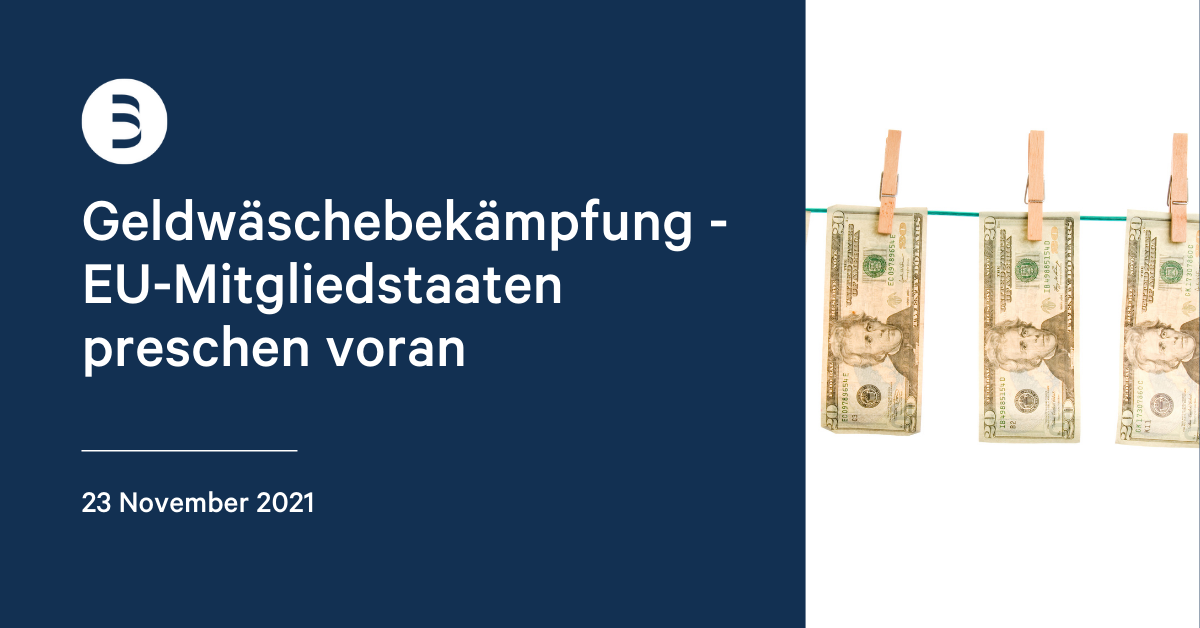 As recently covered on our blog, the revision of the regulatory framework for prevention of and countering of money laundering is currently being discussed at the European level. Following the publication of a comprehensive legislative package by the EU Commission on 20 July 2021, it is now under scrutiny of the co-legislators, the Council of the EU and the European Parliament.

In the European Parliament, as with revisions of the previous anti-money laundering Directives, all four legislative proposals of the package are dealt with in a joint procedure of the Committee on Economic and Monetary Affairs (ECON) and the Committee on Civil Liberties, Justice and Home Affairs (LIBE). The first joint meeting with a presentation of the package by the Commission and a public hearing will take place on 01 December 2021. Although substantial negotiations will not start until the beginning of next year, many MEPs are already waiting in the wings and are very committed to the issue.

In the Council of the EU, the state of proceedings is strikingly different. Negotiations in the responsible Working Party on Financial Services and the Banking Union are already very far advanced, as can be seen from a progress report available to us. All legislative proposals are considered to be halfway discussed, although many issues are still contentious among the Member States and require further negotiation, if necessary, at a higher level.

The following is a summary of some of the relevant issues that have already been negotiated in the Council:

Context: The proposed Regulation provides for directly applicable and EU-wide anti-money laundering rules. In particular, provisions affecting obliged entities are transferred from the Fifth Anti-Money Laundering Directive of 2018 (AMLD5) to the Regulation. (More information on the Bernstein Blog).

The Member States are in favour of harmonisation and maintaining a risk-based approach, with some preferring to allow stricter national rules on money laundering and terrorist financing. This suggests that companies may be subject to additional obligations.

Initially, negotiations in the Council focussed on the proposed €10,000 limit on cash transactions. As we have pointed out, this results in effectively exempting traders in goods – with the exception of dealers in art and precious metals – from the anti-money laundering rules.

The amended scope of application in combination with the cash limit means in concrete terms: other dealers in goods, such as those for vehicles, antiques, electronic goods, have so far only been subject to anti-money laundering rules for transactions of €10,000 or more; if a cash ceiling corresponding to this very amount were now introduced, they would thus be entirely excluded from the framework.

The Council has now discussed the extent to which Member States can introduce obligations on additional sectors at national level or whether further traders of high-value goods should be included as obliged entities throughout the EU. There is still disagreement between the Member States on these questions.

The German Association of Money Laundering Reporting Officers (Bundesverband der Geldwäschebeauftragten e.V. – BVGB) addresses this issue in its position papers on the EU AML package and the German coalition negotiations. It considers the exemption of goods traders in connection with the cash ceiling to be very critical: “The cash ceiling alone does not solve the problems in the fight against money laundering.” Therefore, the association advocates for clear rules and guidelines for traders in goods.

In most Member States, the cash transaction limit either plays no role in the public debate or it is widely supported. Until recently, the only notable voices of dissent came from Austria and Germany. However, whether Germany will actually oppose a cash limit in the Council negotiations depends on the coalition agreement at the beginning of December. Whether a cash limit could be blocked at EU level, remains to be seen.

In the ongoing discussions of the Council of the EU, negotiators from some Member States are raising the question as to whether it would be possible under the current proposal to impose stricter due diligence requirements on selected sectors or obliged entities. For instance, additional clarification on the use of information from independent and reliable sources for verifying customer identity is being put forward.

With regard to digital identity systems and their necessary conformity with the eIDAS regulation, other national representatives suggest restoring the wording of AMLD5 to allow the use of equivalent solutions. Harmonisation in this area is particularly – but not exclusively – relevant for the financial sector, which is already subject to extensive due diligence requirements.

Context: The proposal detaches the anti-money laundering supervisory tasks from the remit of the European Banking Authority (EBA) and the European Central Bank (ECB), expands them and assigns them accordingly to the EU Anti-Money Laundering Authority, which is to be newly established specifically for this purpose. It is envisaged that AMLA will coordinate national authorities and will be entrusted with indirect supervision in the financial and non-financial sectors as well as direct supervision in the high-risk financial sector. (More information on the Bernstein Blog.)

There is disagreement among the Member States as to whether the proposed tasks could lead to AMLA being overburdened or whether further tasks to issue regulatory technical standards should be added. Some Member States express opposition to the idea of AMLA being able to adopt binding instructions to obliged entities over which it has no direct supervision.

Supervision over the non-financial sector

According to public statements by the responsible rapporteur in the Committee on Economic and Monetary Affairs, Luis Garicano, it can be assumed, however, that the European Parliament will work towards a tightening of the Commission proposal and considers an extension of the competences of the AMLA.

It therefore remains interesting to see how the four legislative proposals will develop, especially when the substantive political discussions will begin in the Council and the Parliament. The German position in the Council of the EU ought to become more refined with the finalisation of the coalition agreement – which is expected to be published this week. Beyond that, we will have to wait and see what kind of imprint the French Presidency will make when it takes over the helm on 1 January 2022. We can certainly expect lengthy negotiations.