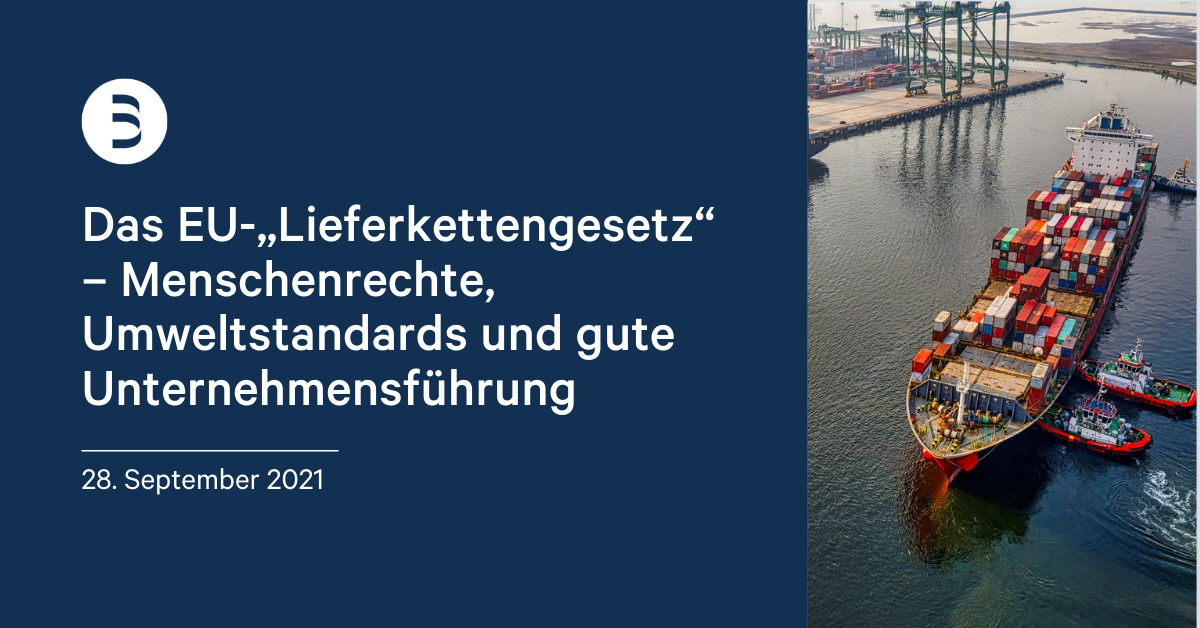 Three months after the adoption of the German Supply Chain Law, Brussels is preparing to publish a corresponding and long-awaited proposal for a Directive. The law on sustainable corporate governance, presented by Vice President Jourová and drafted by Commissioners Reynders and Breton, is due to be presented on October 27. Discussions in Brussels are controversial in the run-up.

Since early 2020, the European Commission has been discussing the presentation of a law on sustainable corporate governance and corporate due diligence. The momentum is evident: since 2017, three EU Member States – France, the Netherlands and, most recently, Germany – have adopted laws to combat human rights abuses in supply chains, as have the UK and Norway.

However, although the Commissioner responsible for Justice and Consumers, Didier Reynders, confirmed the initiative as early as April 2020, the corresponding legislative proposal to this end is still pending. The proposal was originally scheduled to be published this summer, yet it was recently postponed to October due to discussions within the Commission. Now even this deadline seems to be in doubt and remains on the Commission’s agenda as “to be confirmed”.

The proposal is announced, lines of conflict become clear

The controversies surrounding the proposal permeating from the ranks of those responsible for it, but which are also discussed quite openly by stakeholders, are manifold and of a political, bureaucratic and substantive nature.

From a political perspective, it can be noted that Vera Jourová, Vice President of the EU Commission and responsible for the area of “Values and Transparency”, who will present the proposal, is critical of the initiative anyway. It is known that already blocked corresponding projects as Justice Commissioner under President Juncker – Jourová rejects too comprehensive interference into corporate governance by the public sector.

In March, Commissioner Reynders, under whose leadership the law was to be drafted, told the Frankfurter Allgemeine Zeitung that he intended to regulate more stringently than the German law (see this blog post for more). Nonetheless, the Impact Assessment preceding the draft failed the Regulatory Scrutiny Board. The Board is responsible for quality assurance in the early stages of the EU legislative process and reviews Impact Assessments in preparation of yet to be proposed legislation.

Admittedly, a negative assessment by the board is not unusual – the subsequent decision that the dossier would in future be jointly overseen by Reynders and Thierry Breton, Commissioner for the Internal Market, however, did raise some eyebrows. Activists and NGOs have since feared a pro-business “watering down” of the EU proposal.

On a substantive level, the controversies that precede the Commission’s draft can be traced back to a European Parliament resolution “on corporate due diligence and accountability” of March 10, 2021. This resolution already contains a detailed proposal for a Directive which is still considered to be the guiding principle for the legislative project at EU level.

These provisions on civil and administrative liability proposed by the EU Parliament are also in stark contrast to the German Supply Chain Law and could enable those affected by human rights violations to claim damages before EU courts.

What to expect from the Commission’s proposal

Accordingly, both representatives of companies and Member States are very concerned that the forthcoming Commission proposal might resemble the Parliament’s resolution too closely.

After all, the Inception Impact Assessment, published by the Commission in summer 2020, discusses the introduction of a duty of care for board members ensuring that they incorporate sustainability in the long-term strategy of their companies. However, to date no details have been released on the actual substance of the Commission’s proposal – no draft is available, and the aforementioned final Impact Assessment remains unpublished.

On the other hand, an EU-wide harmonisation of the legal framework is favourable for companies, as it would eliminate the current patchwork of laws and thus ensure legal certainty across the board.

What to expect from the German position after the Bundestag elections

Meanwhile, the Brussels co-legislators are getting ready. In a letter to the commission, the leaders of several parliamentary groups emphasise that the ambitious provisions proposed by the European Parliament should be maintained – in particular, the broad scope of application and the respective liability applying to violations.

Whereas the support for a comprehensive due diligence law by the EU Parliament is considered largely assured, the role of the Member States in the Council of the EU remains unclear. The Nordic Member States have voiced criticism and demanded the part of the proposal covering sustainable corporate governance – and not supply chain due diligence – to be dropped.

In any case, it is France and Germany which are likely to play an important role in the inter-institutional negotiations between the Commission, Parliament and Council, especially when considering the upcoming French Council Presidency, which begins in January 2022. President Macron is known to not be a friend of the French law of 2017 – making a stricter obligation of companies hardly feasible with him.

Naturally, Germany’s stance will be determined – as many other things – along the coalition negotiations which are about to take place in the wake of the Bundestag elections. The parties’ positions differ, with the greatest congruence between the Social Democrats (SPD) and the Greens. Both are in favour of a comprehensive due diligence law with binding rules, civil liability and compensation possibilities for those affected at the European level. The Christian Democrats (CDU/CSU), on the other hand, already rejected in advance any EU proposal that would go beyond the German Supply Chain Law, while the Liberals (FDP) are in favour of risk-, sector- and size-specific measures.

Therefore, we will be discussing the upcoming EU proposal tomorrow, 30 September – with Lucrezia Busa, cabinet member of Commissioner Reynders, for the European Commission and with Axel Voss, Member of the European Parliament, and shadow rapporteur of the Parliament resolution for the lead Legal Affairs Committee.

We are co-hosting the discussion with Prof. Dr. Thomas Dünchheim, Désirée Maier and Christian Ritz from Hogan Lovells on 30 September 2021 from 14.00 – 15.30. To register, please follow this link.