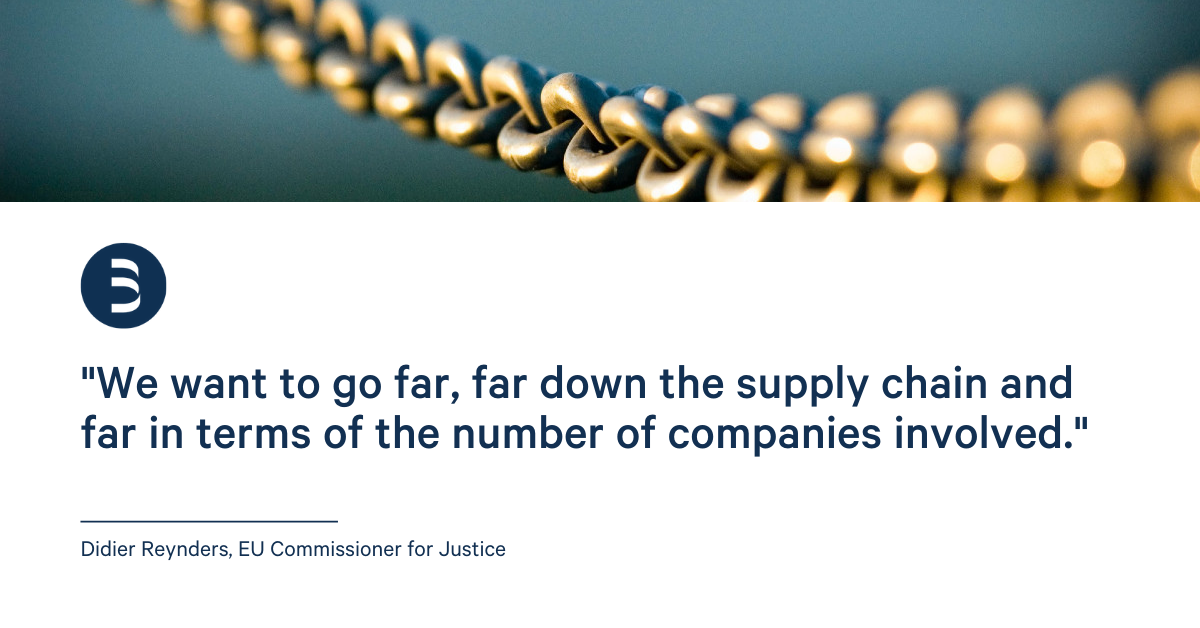 In recent years, a multiplicity of new laws on due diligence in supply chains has been introduced at the national level. While in the Netherlands, the focus has been on child labour, forced labour is emphasised by the British initiative. France, as well as Germany, on the other hand, are opting for a rather overarching framework. This trend is being taken to the next level in the European Union, with an upcoming proposal for a Directive which might introduce far-reaching supply chain due diligence requirements for companies.

In future, a company’s responsibility should extend to the entire supply chain, graded according to its “possibilities of exerting influence”. This primarily includes the company’s own business division as well as direct suppliers. Indirect suppliers will be included if the company has “substantiated knowledge” of human rights violations at this level.

The textile, food and automotive sectors are often seen as risk sectors, which must fulfil their due diligence obligations along their global supply chains accordingly.

“It is not surprising that textiles are seen as a risk sector, as we are often in the spotlight,” says Ralph Kamphöner, who represents the German Textile and Fashion Industry Association at the European level: “However, the sector is far better than its reputation.”

It is the individual company’s responsibility to conduct the risk assessment provided for in the Supply Chain Act. This has been clarified by the Federal government in its answer to a question from the FDP parliamentary group:

“The legal duty of due diligence should be implemented in a risk-based manner and apply to all supply chains. Which risks the company must address and how largely depends on the individual company and risk situation. The assessment and prioritisation along the principles anchored in the draft law is carried out by the companies within the framework of their risk analysis. On this basis, the company itself decides which risks it will address first.”

Following a hearing in the lead Committee for Labour and Social affairs in May, the German Supply Chain Act is expected to be passed before the upcoming summer recess.

Meanwhile, the EU also hopes to present its corresponding proposal for a Directive before the summer. The European Commission has already made it clear that it seeks to go much further than the German government. In an interview with the Frankfurter Allgemeine Zeitung a few weeks ago, Didier Reynders, the Commissioner responsible for Justice, said:

“We want to go far, far down the supply chain and far in terms of the number of companies involved.”

The EU proposal is therefore likely to cover all companies – those based in the EU as well as companies importing into the EU. The due diligence obligations to be fulfilled would be graded according to sectoral and company-specific risks.

From the perspective of the textile and fashion industry, Ralph Kamphöner is critical of the EU proposal:

“Some risks are company-specific and therefore difficult to coordinate across the sector. A small label, for example, operates very differently compared to a large fashion group. We therefore consider the proposals for sector-specific due diligence action plans to be of little use.”

The European Parliament supports the ambitions of the European Commission and already passed a comprehensive Resolution in March this year, which also contains a first draft for a Directive.

This Directive proposal clarifies how know-your-customer (KYC) obligations are to be covered along the value chain, with due regard to trade secrecy. Relevant information to be disclosed by the company includes:

“names, locations, types of products and services supplied, and other relevant information about subsidiaries, suppliers and business partners in the value chain.”

On the part of industry, the present German proposal was met with substantial criticism. Of particular concern is the burden placed on – especially small and medium-sized – companies when it comes to recording and documenting supply chains.

This is where digital approaches, which are designed to globally map and track supply chains from raw materials to pre-products and components, could potentially help.

“The data discussed above is of no use as long as it is not machine-readable. There must be a standard here. Moreover, it is difficult for an entrepreneur to escape liability if he could have come across a labour law offence committed by a supplier through a brief Google search, for example. However, by systematically monitoring global publications, a company can identify some risks early on and take the appropriate steps. “

The German Supply Chain Act is due to come into force on 1 January 2023, by which time an EU Directive that will have to be transposed into German law could already be in place. The Federation of German Industries has recently pleaded for a uniform and global, or at least European solution to replace the German Supply Chain Act. It proposes to insert a “sunset clause” into the legislation. The German law would then automatically be repealed in the event of an identical European regulation – that is, if it passes the Bundestag before the end of the legislative period.

If you have any questions about the Supply Chain Act or the upcoming EU Directive proposal, we are available at any time for your enquiries.