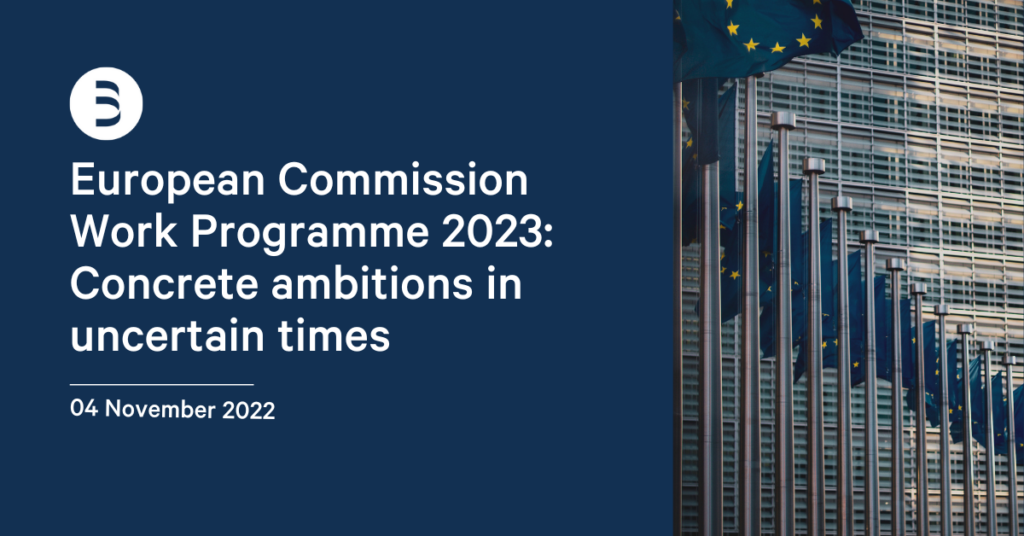 On 18 October 2022, the European Commission presented its Work Programme 2023, the last of von der Leyen´s legislative period, which should demonstrate the European legacy towards crisis and to establish once again the credibility and cohesion of the EU Institutions.

Every year, the EU Commission presents its Work Programme, which outlines the key actions and initiatives that will be adopted in the upcoming twelve months.

As the Guardian of the Treaties and the Policy-Setter, the EU Commission design the overall strategy of the Union and drives its political direction. In performing this role, the European Commission has several instruments at its disposal to meet its responsibilities:

At the beginning of every legislative mandate, the EU Commission submits political guidelines, which determine the top priorities of the Commission’s five-year term and serve as a constant framework in the development of concrete initiatives on an annual basis.

The EU Commission political priorities for the term 2019-2024 cover six different headings: A European Green Deal, A Europe fit for the digital age, An economy that works for people, A stronger Europe in the world, Promoting our European way of life, A new push for European democracy.

2. The State of the Union address (SOTEU)

Every year EU Decision-makers and stakeholders are looking forward to hearing the words of the President of the Commission in the the State of the Union address (SOTEU). This represents a crucial moment for the European debate and a unique opportunity to open the discussion on mayor European issues and challenges. In September, the President of the EU Commission delivers the State of the Union address during the Plenary Session of the European Parliament followed by a Letter of Intent sent the same day to the President of the European Parliament. The speech on the State of the Union is meant to update the European citizens and the other EU-Institutions about the progress made in the past year and to outline which priorities should be leading the political agenda of the year ahead. The political character of the SOTEU is reflected in its aim to fulfil the transparency and accountability requirements of the EU Commission towards the other legislators and citizens. Although the SOTEU represents the kick-off of the European discussion on the annual policy agenda, the concrete proposals are concretised with a final step: the Work Programme.

In the period after the SOTEU, the EU Commission publishes its work programme, which substantiates with targeted proposals the 5 years overall strategy set in the political guidelines and the annual policy agenda announced in the SOTEU. The Commission Work Programme kicks off with a policy communication that reiterates and deepens the political direction already announced in the SOTEU; in a second part, various annexes are set out presenting mainly the key initiatives and proposals that will be adopted in the following year, divided across their respective headline ambitions of the long-term political guidelines. The Work Programme is therefore the detailed roadmap on which the European legislators are relying for the next twelve months.

“A whole continent has risen in solidarity… Europeans neither hid nor hesitated.”

The words of EU Commission President Ursula Von der Leyen, delivered in her State of the Union address in front of the European Parliament on 14 September, open the policy communication of the Work Programme 2023.This programme is the third Work Programme of the Von der Leyen´s Commission, which includes the efforts of the European Union to advance its political agenda and reach its long-term objectives while fighting against all the challenges raising from new constant crisis.

The Commission Work Programme 2023 proposes 43 new policy initiatives across the 6 headline ambitions established in the Political Guidelines at the beginning of the legislature period.

1. A European Green Deal and Circular Economy: Moving forward in time of crisis

In the spotlight, among the many proposed measures, is a comprehensive reform of the electricity market as one of the key initiatives across the European Green Deal. This measure aims to control the volatility of energy prices aggravated by the war in Ukraine, including the decoupling of electricity and gas prices. The revision of the electricity market should not only ensure the affordability of energy prices for consumers and industry, but it will also create fertile ground to prepare the EU for the industrial transformation needed to address decarbonization.

Another key proposal in the Green Deal context is the establishment of a new hydrogen bank that will allow the investment of 3 billion euros as a stimulus to open up the European hydrogen market. During the SOTEU the President Von der Leyen emphasised the role of Hydrogen and how this” can be a game changer for Europe”. However, this proposal has not gone without criticism, with some industry´s representatives urging the Commission to remember that hydrogen cannot be considered as a real and reliable energy source as it itself needs energy to be generated.

The Conference on the Future of Europe has been an important step to put the European Union close to the citizens, from April 2021 to May 2022 citizens across Europe have made their voices heard in a series of debate and discussions with the aim to concretely shape the future of Europe.

Some of the initiatives proposed in the Commission Work Programme 2023 are the direct result of the Conference. An important outcome in terms of sustainability and Circular Economy resulted in a new initiative with the objective to reduce waste: indeed, a revision of the Waste Framework Directive is planned for the third Quarter of 2023 with a specific focus on two crucial sectors: food and textiles. The Commission after a consultation phase identified the food and textile sectors as the most in need of prompt action, the efforts of the Commission in the textile sector for example have been manifold within the Circular economy package such as presenting the EU Strategy for sustainable and circular textiles, as outlined in our Blogpost.

While the remaining proposals of the circular economy package presented by the Commission in March 2022 are scheduled for the end of the year, the Right to Repair initiative, which was due by 30 November, has already been postponed and will probably be included in the 2023 agenda (Please see our blog article for more information).

An important step forward has been taken also regarding the EU Digital Agenda while celebrating 30 years of European Single Market. To make Europe fit for the digital age by reducing current and future strategic dependencies the EU Commission is expecting to publish its proposal on the “Critical Raw Materials Act” in the first quarter of 2023, aiming at the diversification of critical raw materials essential for Europe’s digital resilience.

However, whereas many new initiatives have been proposed in the programme, there is no shortage of criticism for a lack of focus on key topics. The first critical point is the revision of the REACH Regulation on chemicals: this proposal of immense importance to protect citizens and the environment was scheduled for this year but never got off the ground. The Commission included this initiative in the 2023 programme but postponed it to the third Quarter of 2023. This delay was seen by many as the result of influence from the interest representatives from the chemical sector. Indeed, while this proposal is part of the programme, due to the scale of the reform it will probably never be finished before the end of the legislature, with the European Parliament elections approaching in 2024.

A second critical point is related to the planned revision of the Waste Framework Directive, Although a revision for food and textile sectors have been announced int the Work Programme 2023, several European industry stakeholders showed their disappointment due to the lack of a broader and more ambitious review of the Directive, claiming that the European Commission could have lost an occasion to start the path towards the establishment of a harmonised legislation for waste across all Member States.

All in all, the EU Commission Work Programme 2023 defines a full and colourful agenda that will keep the European legislators fully occupied throughout the last year of the parliamentary term. Despite lights and shadows, the Commission is moving forward towards the goals set at the beginning of the legislative period without letting the current crisis-driven challenges jeopardise the whole project.

Having a clear picture of the procedures on the evolution of the Work Programme of the European Commission and understanding how to concretely approach, it is essential to support companies in influencing and shaping crucial European initiatives. Based on this expertise, it is possible to develop a targeted approach and to identify the optimal time to act to make stakeholder interests heard.