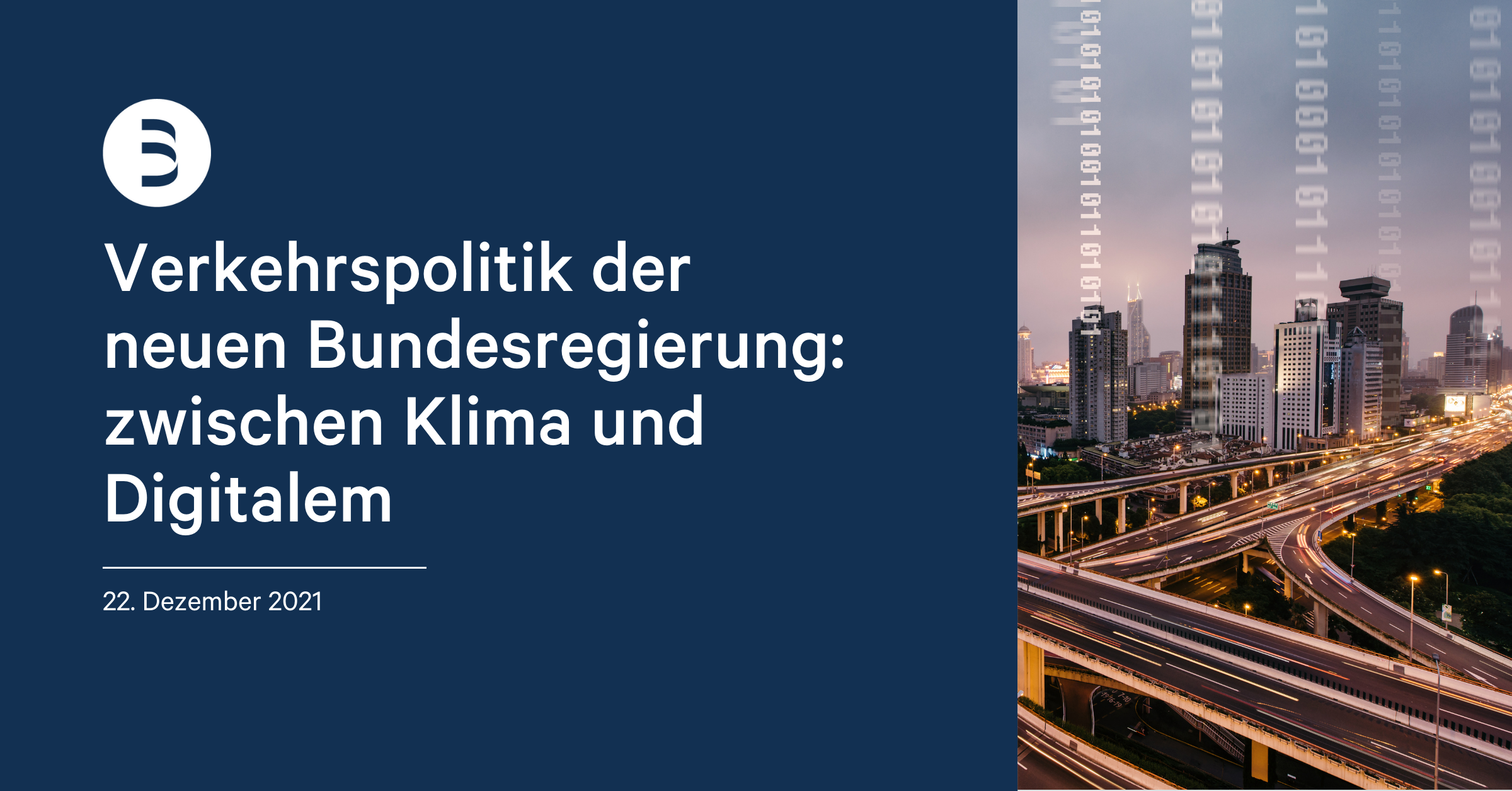 Three months after the German federal elections, the new legislative term begins with a new coalition agreement, a new cabinet, and new political decision-makers in the Bundestag and the federal ministries. To what extent will the projects that were campaigned in the election run-up come to the fore? And how much will they change previous federal government transport policy? Will climate policy determine the direction of transport policy?

Already during the election run-up, climate policy was the focus of almost all parties’ campaigns. A central aspect of climate action was and remains mobility and transport policy – a sustainable and innovative transport policy can contribute significantly to the transition towards climate neutrality. But in what respects is transport policy still climate policy, and which role does digital policy play in transport?

Structural Changes in Parliament and Ministry

A glance at the restructured Federal Ministry reveals the first obvious change: while transport policy was previously first in its name, with digital infrastructure added as a second responsibility, it will now be called Federal Ministry of Digital and Transport (Bundesministerium für Digitales und Verkehr – BMDV). Digital first and then transport? An intentional reprioritisation?

The continuing centrality of transport policy is a given and cannot be denied due to its relevance and prominence in the coalition agreement.

And yet there are many signs that the focus is being placed on digitalisation. One of those signs is the appointment of Stefan Schnorr as state secretary, who previously led the digital and innovation policy department at the Federal Ministry of Economy (Bundesministerium für Wirtschaft – BMWi). Another is that there are many parallel EU legislative projects coming up, such as the Digital Services Act and Digital Market Act, which will soon require full attention from digital policymakers.

Taking a look at the German Bundestag, we see a change in structures as well: The former Parliamentary Committee on Transport and Digital Infrastructure is being renamed “Committee on Transport” – as a result, all digital issues will be handled by the Committee on Digital Affairs (which, incidentally, already exists). The circumstance that this Digital Committee will now also be in the lead, where in the last legislature it was only involved in consultation, greatly enhances its status, and shows the relevance that digital issues are to be given. Former transport politician such as Thomas Jarzombek are now members of the Digital Committee, and the new Transport Committee is made up of many new members. Only 12 of the 34 MPs already served on the Transport Committee, the remaining ones are new.

What will public policy professionals have to consider when dealing with transport and mobility issues in the future?

Transport politician does not necessarily mean transport politician – even more than before, the individual focus of the policymakers plays a central role and is to be taken into account. The differentiation between digital and transport is on the one hand less evident and on the other hand a decisive factor.

Transport policy is relevant in terms of digital policy and climate action. The first sentence of the chapter on mobility in the coalition agreement, “We want to use the 2020s for a departure in mobility policy and enable sustainable, efficient, barrier-free, intelligent, innovative mobility that is affordable for all”, shows that mobility issues are intertwined with many other policy areas. They cannot be considered in isolation from each other. Those who want to shape mobility policy also have to consider associated policy fields and issues.