A second chance for the erroneous Berlin elections of September 26, 2021? What would the procedure look like? 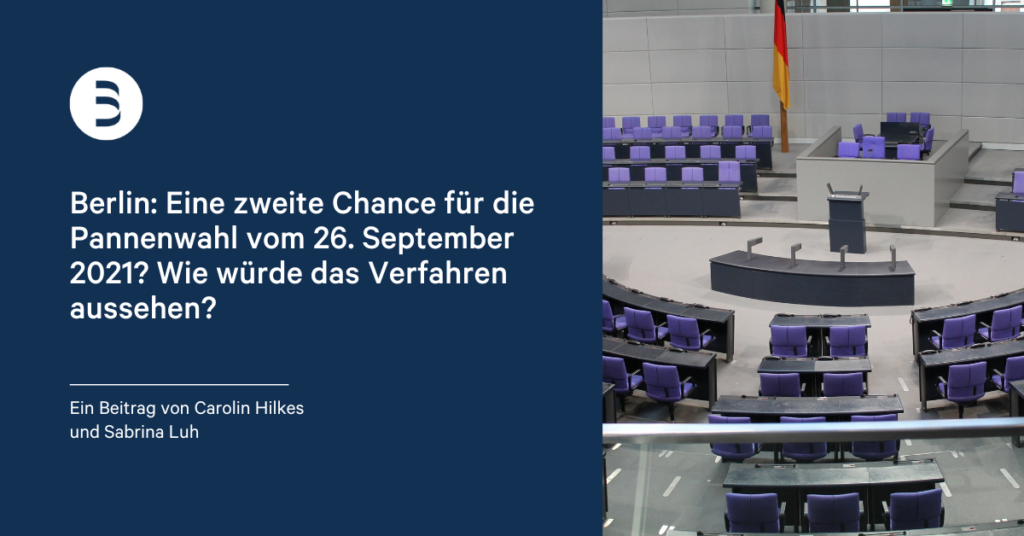 The last elections for the German Bundestag and the Berlin House of Representatives went anything but smoothly in the capital city. The reasons for this were faulty or missing electoral rolls, the insufficient number of election officials, the temporary closure of polling stations and overall long waiting times before casting one’s vote – if one had made it there at all despite the road blockings due to the Berlin Marathon taking place on the same day. Given the inadequate conditions, politicians and the public are now discussing the possibility of new elections. But what does that actually mean? And how would we get there?

Both a new election and a by-election can thus be ruled out as a consequence for the Berlin election chaos of September 26, 2021. For this, however, a re-election could be ordered. For this will take place if the election is declared wholly or partially invalid in the election verification procedure (BWG §44 paragraph 1). To this end, the Committee for the Scrutiny of Elections, Immunity and the Rules of Procedure must make a corresponding recommendation, which must be adopted by the plenary of the Bundestag.

The way to the re-election

On September 8, 2022, the Election Scrutiny Committee of the German Bundestag deliberated on the resolution recommendation on the objection of the Federal Returning Officer and on the Berlin election. The specific results of the deliberations have not been made public to date. The vote of the plenary on the resolution recommendation is scheduled for this month (October) but only after the results of the deliberation of the Berlin Constitutional Court on a possible re-election of the Berlin House of Representatives.

On September 28, Berlin’s highest court concluded a preliminary assessment that the election errors were mandate-relevant, i.e., had an impact on the composition of parliament and the distribution of mandates. Only a complete re-election could thus restore a constitutional state of affairs. This assessment by the Berlin Constitutional Court now also affects the legal evaluation of the Bundestag election: The decision on the re-election of the German Bundestag was originally scheduled to be made on Thursday, September 29, in the Election Scrutiny Committee, but will now be postponed in response to the assessment of the Berlin Constitutional Court.

Features of a re-election

If, at the time of the decision of the election review procedure, six months have not yet elapsed since the main election, an election shall be repeated in accordance with the same regulations, election proposals and electoral rolls (BWG §83 paragraph 2). If the election is repeated only in individual electoral districts before the expiry of these six months, eligible voters may take part in the election if they have casted their main election ballot in the electoral districts for which the election is repeated. People who have since moved away from the area will have their ballot returned upon request with a note of validity for the re-election (BWO §83 paragraph 4 & 5).

As more than six months have now passed since the main election, deviations in organisation and implementation can be expected. If the re-election takes place only in individual electoral districts, however, the delimitation of these may not be changed (BWO §83 paragraph 2). Election proposals may only be changed if this results from the election verification decision or if a candidate has died or is no longer eligible.

Ballot papers may only be issued by municipalities in the area in which the re-election takes place. Voters who have lost their right to vote since the main election are to be removed from the election roll.

The re-election must take place no later than sixty days after the decision declaring the main election invalid has become final (BWG §44 Paragraph 3). Assuming that the plenary passes a resolution for a re-election in one of the two sitting weeks in October (calendar week 41 or 42), the re-election would therefore have to take place in mid-December of this year in accordance with the Federal Election Act.

The exact date of the re-election is to be determined by the Federal Returning Officer. This office was taken over on October 1, 2022 by political and administrative scientist Stephan Bröchler, who was appointed by the Berlin Senate on September 6, 2022. He thus replaces Ulrike Rockmann, who had already expressed her wish to step down from the honorary office at the beginning of the year.

Deductions from the procedure

What are the implications of a potential re-election of the German Bundestag in Berlin?

According to media coverage, a partial re-election of the Bundestag is under discussion in 440 of Berlin’s 2,257 polling stations. This would affect all twelve districts, especially Pankow, Mitte and Reinickendorf. However, the election would presumably – apart from Reinickendorf – be limited to the second vote. There Monika Grütters had prevailed with only 1,788 votes against the SPD candidate Torsten Einstmann. This is therefore the only constituency that could hang in the balance.

A re-election of the Bundestag as it is currently being discussed – condensed to Berlin as a federal state and to particular polling stations – is unlikely to have much impact on the distribution of majorities in the Bundestag, as the shift in second votes is unlikely to be particularly large: Just under 1.85 million ‘Berliners’ voted in the last Bundestag election, and of those, another 20 percent would vote again – that is, about 370,000, which is just 0.8 percent of the people who voted in the 2021 Bundestag election as a whole.

However, the re-election could have very concrete personnel effects: A shift in the second votes could mean the end of the term for some members of the Bundestag who were elected via their parties’ state lists. The latest election polls already show a change in mood compared with the last election: The Greens and CDU/CSU are gaining in approval ratings at the expense of the SPD and FDP. However, it will not be possible to accurately estimate which members of parliament will lose their seats until the extent of the re-election has been determined by the Election Scrutiny Committee.