New government or opposition – Who has started better in its new role? 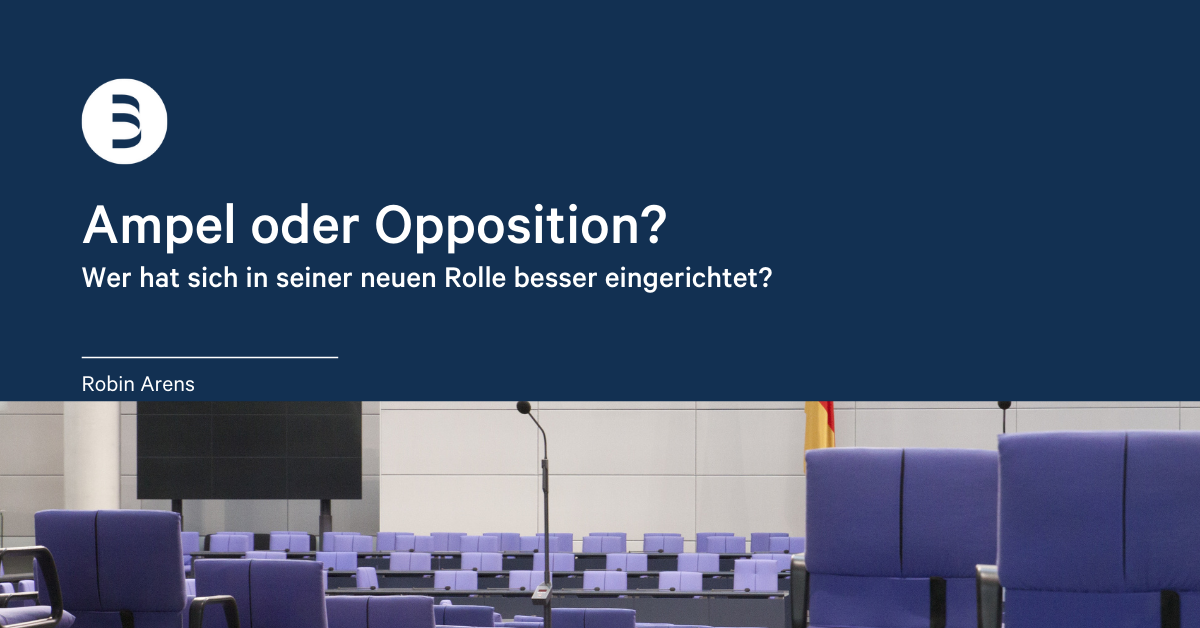 The Federal election in September 2021 has shifted the balance of power in the Federal parliament. This shift is accompanied by new roles for the parliamentary party groups. While the Christian Democrats have found themselves in the opposition for the first time since the 2002 elections, the Greens are part of the coalition for the first time since the 2005 elections. After about seven months of the new coalition between Social Democrats, Greens, and Liberals and with the beginning of the parliamentary summer break, it is time to analyse to what extent Christian Democrats have already arrived in its new role and how effectively the new coalition, formed for the first time in this particular composition at the federal level, is working.

The Christian Democrats and their new role

Whether the CDU/CSU parliamentary group has taken up its new opposition role can ultimately only be answered by the actors themselves. We do not want to evaluate the specific content of their work. However, the opposition has different tools at its disposal which, if used, can have different effects on political or media debates and procedures. We have chosen two of them as examples:

– First, we look at the number of minor interpellations issued by each parliamentary group. They are a tool for the Parliament to have certain facts or questions explained by the Federal government in order to create publicity and starting points for further debate.

– Secondly, we take a look at the number of motions tabled by a parliamentary group. Compared to minor interpellations, motions are policy proposals formulated by parliamentary groups, which are often used by the opposition parties to point out alternatives to draft laws or plans from the coalition agreement.

In order to establish comparability between the individual election periods, the period of the first 250 days since the constitution of the respective parliament is looked at for both variables.

So far in the 20th German Bundestag, the Christian Democrats have issued the fewest minor interpellations. The Parliamentary party groups more familiar with opposition work (e.g. Socialists) have significantly higher numbers. Two observations can be generalised over the period under consideration:

2 The reverse is also true: it is evident that parliamentary groups that have newly come into the opposition role have released remarkably fewer minor interpellations in the compared time period. 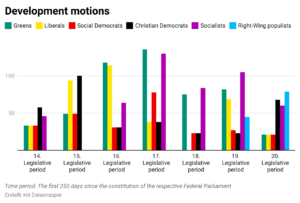 In contrast, the situation is more complicated when it comes to motions: This parliamentary tool is also used much more by the parliamentary party groups supporting the Federal government. An examination of individual motions shows that these motions are used to set policy priorities and formulate political positions as well as demands on individual overriding issues. Parliamentary party groups that find themselves in their new opposition role submit motions more frequently than small questions. A possible explanation for this is that most MPs as well as staff members are practiced in drafting political motions due to years of party work. Furthermore, it can be argued that motions are more like the type of draft laws than minor interpellations. Thus, it is reasonable to assume that MPs and parliamentary party groups that were part of the coalition in the previous legislative period can draft motions more efficiently than minor interpellation. In the ongoing legislative period, the Christian Democrats are no exception. In a relative comparison, it submits significantly more motions than minor interpellations and is one of the most active parliamentary groups in this category.

In assessing the work of the new Federal government, we also look at structures rather than the qualitative assessment of content. In this case, for the period of 200 days from the election of the Federal Chancellor and consequently the swearing-in of the Federal Ministers, we look at how many draft laws have been introduced by the Federal government in the Federal Parliament. This is because, in theory, more legislation introduced at this early stage of the government’s work should indicate that the newly formed government will work more effectively and smoothly together as well as thus be able to create a high legislative output. The ambitious and comprehensive coalition agreement should also underline this goal. 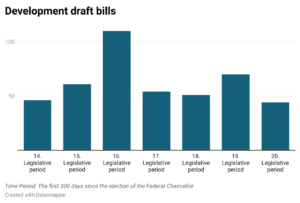 It is striking that the current traffic light coalition has the lowest output over the period of all coalitions considered. Considering the previously formulated assumption, the figures suggest that the coalition – measured by its output – has yet to find the best joint working mode. However, if one compares the current output of the first coalition of three parties, in which the coordination effort is significantly higher than in the previous alliances, with that of the previous governments (e.g. Schröder I, Merkel II and Merkel III), the number of draft bills introduced is not significantly lower. It can thus be argued that the current government, despite a coalition working together for the first time in this form, shows a comparable work performance as its predecessor governments.

The data-based approach to the questions formulated at the beginning shows that it is clearly more challenging for parliamentary party groups that are at the beginning of their opposition period to get used to the (changed) parliamentary business. Either resources have to be given up (fewer MPs, smaller number of staff, no access to Federal Ministries) or they have to be built up first (empowering MPs and staff, building up structures). As a result, the generation of minor interpellations in particular, and thus the control of government work, is below average at the beginning.

The transition to government responsibility seems to be easier for new governments on the basis of the figures considered. Although there are also differences in output here, they are fundamentally smaller. One explanation for this could be that when a new Federal government is formed, only the political leadership in the ministries is replaced. The lower ranks, on the other hand, which significantly prepares legislative projects, are not changed, so that the smooth functioning of the executive is guaranteed and legislative activity does not have to be learned all over again. Nevertheless, the current coalition shows the lowest output (so far) in a historical comparison, which can be explained by the first-time participation of three parties in government and the very volatile political environment.