Growing EU regulatory focus on the textile sector – towards a sustainable reform for planet and businesses? 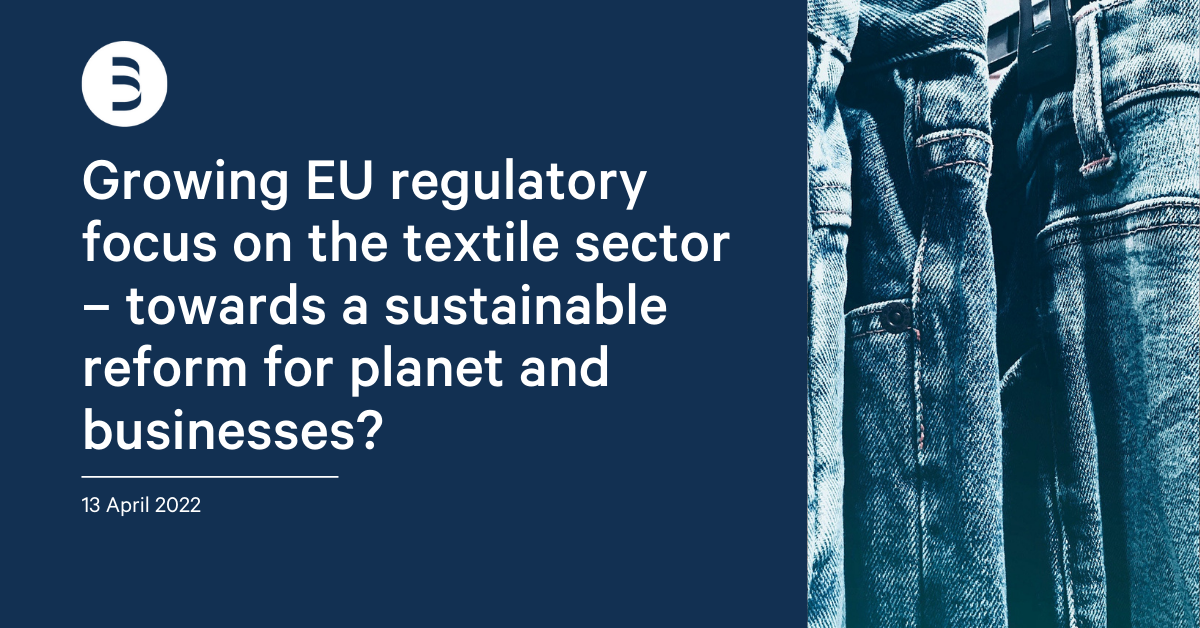 On 30 March 2022, the European Commission published its EU Strategy for Sustainable and Circular Textiles. Considering this initiative alongside the proposal for a Directive on Corporate Sustainability Due Diligence, the textile sector finds itself under enhanced scrutiny. Central to the Strategy is a legislative proposal for a new Regulation on Ecodesign for sustainable products, which carries the potential to thoroughly reform the textile sector.

Disassembling the policy-matryoshka – the origins of the Strategy

The European Commission seeks to achieve EU climate neutrality by 2050 and plans to accomplish this through the European Green Deal, which was adopted in 2019. Covering a wide variety of areas, this deal also envisions a shift towards a circular economy and outlines concrete steps in the Circular Economy Action Plan as adopted in March 2020. The first set of initiatives derived from this Action Plan was now published as “Circular Economy Package I” on 30 March 2022.

The package contains a set of complementary initiatives, such as

The Strategy for Sustainable and Circular Textiles partly reflects the appreciation that the Commission intends to communicate, defining the industry as a “key value chain” which employs no less than 1.5 million in Europe, mostly in small and medium-sized companies (SMEs). Few realise that the sector stretches far beyond apparel and household textiles but is also crucial to the production of medical and protective equipment, buildings and vehicles.

Public scrutiny serving as a hook for regulation

However, the very fact that the European Commission declared the textile sector a priority and published a dedicated strategy alongside the legislative proposal for the Ecodesign Regulation reflects the perceived urgency for transformation within the industry.

With regard to workers’ rights, the sector provided the impetus that kicked off the initiative on the recently published proposal for a Directive on Sustainable Corporate Due Diligence. In said Directive, the textile sector receives dedicated attention, being classified as one of three high risk sectors with regard to its negative impact on environment and human rights (s. our blog post from March 2022). On the other hand, the Strategy is mainly concerned with the challenges and problems resulting from ever-growing textile waste in Europe and beyond.

According to the Communication, in the EU alone, 5.8 million tonnes of textiles are being discarded every year, yet only 1% of them are recycled into new clothing. Meanwhile, synthetic fibres in textiles provoke up to 35% of all the microplastics released into the environment (cf. EEA). An issue that pertains to the entire supply chain, ranging from in­suf­­­fi­­cient wastewater treatment in third countries up to the dumping in landfills or incineration.

In conjunction, the Textile Strategy, the Due Diligence Directive, and the Ecodesign Regulation impose a regulatory overhaul on the textile industry, targeting the characteristics of the products as well as the responsibility of the companies behind them.

According to the Commission Communication, the textile industry ranks among the most ecologically unsustainable sectors globally. The sector thus causes the fourth-highest impact on the environment and climate change, which is even expected to worsen considering that global textile and footwear consumption is forecasted to increase by 63% until 2030. Reference is made to the concept of “Fast fashion”, as such named and shamed by the Commission, with the clear ambition to disincentivise its business model.

Therefore, it is not surprising that the Commission identifies a need for regulation and finds that 9 out of 10 Europeans agree that clothing should be made in a way that it lasts longer (cf. Factsheet). With the current initiative, the Commission clearly expresses the ambition to regulate businesses and empower consumers to achieve a true paradigm shift.

The apparel industry, mainly a B2C-business, finds itself under great public scrutiny – especially when compared to rather unknown, B2B-based industries, where a need for action is less easily identified. While some industries might perform equally as bad, notably ecologically, the exposure to consumers and the respective impact on public opinion resulting from said exposure allows the Commission to propose extensive regulation more.

The Textile Strategy – A toolkit for action

The EU Textile Strategy is a policy document that outlines the key actions, foreseen to make the textile industry more sustainable. It is therefore a plan that proposes to introduce a wide range of instruments, such as

as well as measures

However, much depends on the details of the proposed “transition pathways” that are ought to manifest these goals into concrete measures. Public consultation for this “transition pathway” is currently open and invites interested stakeholders to express their views until 15 May 2022. This represents a crucial opportunity for industry voices to be heard.

As the European Apparel and Textile Confederation (EURATEX) notes:

“If wrongly implemented, such an unprecedented wave may cause a complete collapse of the European textile value chain under the burden of restrictions, requirements, costs and unlevel playing field. On the contrary, the changes ahead can boom the entire textile ecosystem and create a model of successful green and digital transition in manufacturing, which starts in Europe and expands globally.”

An EU Strategy by itself is not legally binding but represents the planning and ambitions of the European Commission, which will subsequently be realised through the adoption of legal instruments. Concerning the Textile Strategy, the main tool of implementation will likely be the simultaneously proposed Ecodesign for Sustainable Products Regulation.

The tides are turning – Will the EU flip business upside down?

The old Ecodesign Directive contains a narrow focus on energy requirements and, as a Directive, allowed for more national discretion in transposing the law. The new Regulation, however, is envisioned to apply to “any physical good that is placed on the market or put into service, including components and intermediate products”, with only limited exemptions.

This deliberately broad scope as well as the choice of instrument (unlike a Directive, a Regulation is immediately and universally applicable) is made out to break the paradigm of linear economic models (produce – consume – discard) in favour of circular markets.

The Ecodesign for sustainable products Regulation, represents the legal framework for a potentially thorough reform in product design and might therefore become a crucial piece of legislation for companies active in the textile and fashion sector.  However, and contrary to the Strategy, this proposed Regulation will be subject to negotiations between the European Parliament and the Council of the EU. These are likely to stretch over the next two years which allows companies to make their voice heard.

The consumer at the centre

Especially the notion of consumer empowerment represents an interesting and central element to both Strategy and Regulation. The latter, for example, not only includes provisions mandating minimum requirements of the eco-design performance of products but also create new rules on minimum information about such product characteristics, as well as the products’ environmental footprint (cf. Art. 7).

Furthermore, a new digital product passport (cf. Art. 8), and updated product labels, will be introduced to ensure the visibility of product compliance and environmental footprint to consumers, and enforcing authorities. Companies shall further be held accountable for the destruction of unsold goods, incl. an obligation to reveal and justify the number of goods they destroy (cf. Art. 20).

In addition, it does not only apply to business conduct of private entities but also introduces rules on mandatory ‘green public procurement’ (cf. Art. 58). While the Digital Product Passport could become a powerful and useful instrument, provided regulators and enforcers manage to perform sufficient market surveillance, other actions might simply overwhelm SMEs which would need pragmatic approaches and systematic guidance.

On basis of the legislative framework as proposed in the Ecodesign Regulation, the Commission together with national experts will determine products and product categories not yet sufficiently covered by EU law, such as the textile sector, and define technical details in delegated acts that make clothing last longer as well as easier to repair and recycle.

As the Proposal for the Regulation is very fresh on the table, the EU Parliament, for example, finds itself still in “preparatory phase”. The legislative file has thus not been announced in plenary yet and no lead Committee or rapporteur have officially been determined. Considering this, it will likely take years until the targets and instruments enshrined in the EU Textile Strategy unfold their legally binding potential.

On the other hand, the Strategy itself is simply referencing market trends which are already a reality, confirming the ethical high ground of clothing companies specialised in sustainable production, and shaming other market participants unsustainable. In this regard, the proposal for a Regulation could indeed establish much needed legal certainty and might even lead some actors to rethink and reform their business practice.

Naturally, everybody is one the same side to preserve people and planet from damages of all kinds. The paths to this common goal, however, open much space for discussions. How can SMEs be safeguarded to not drown in compliance requirements? How will fashion-giants like Italy and France defend their macroeconomic interests in the Council of the EU?

While the train has clearly departed, the tracks are still subject to changes and alterations.

Would you like to stay informed on the progress of the file or do you already have specific questions?